It all started on a hayride. Hank Taylor had moved in his house outside of Ashland in June 1975, the house he still lives in. That same month, his neighbors organized a welcome hay ride. Clare Connors (Clare Joplin at the time) had brought her penny whistle for the occasion. It’s not entirely clear how things happened but somehow, the penny whistle dropped and got crushed under the wheels of the wagon. One thing leading to another, Hank and Clare decided to order new whistles and teach themselves how to play Irish tunes. Clare was an accomplished musician on the whistle, piano, and accordion. Once she and Hank got their whistles, they met in Clare’s kitchen and she taught him some whistle tunes. Within a week, Danny Case heard about it, joined and shortly after, started to bring other musicians living in the area. Quickly, a budding group of 7-8 musicians met each Sunday. Within a month, some people started dancing in the kitchen. Steve Lane, a librarian from Kansas, knew some Irish and other dances and began to teach them to the group.  That’s how it all started.

Before the end of 1975, the group had grown too big to dance in Clare’s kitchen; the group moved to the Chez Chandelle, “the Chez” for short, a coffee house in the First Presbyterian Student Center, on Hitt Street. That complex has been remodeled but it used to be in a U shape with the Presbyterian church on the left, the student center on the right, (student living quarters), and the activity building in between. In time, the Chez also proved to be too small and the dance moved to the large room in the church activity building. At that time, the Chez had live music, split from any religious content. There were several one hour sets on Friday and Saturday nights, free of charge. Dave Para was in charge of programming to get musicians for these two nights. Other nights, there were jams. In 1977, Dave remembers some nights when there were several jam sessions going on at the same time throughout the living quarters of the student center: one in the kitchen, one in the back room, one in the front room, and one outside. There were lots of fiddles; people were learning to play. 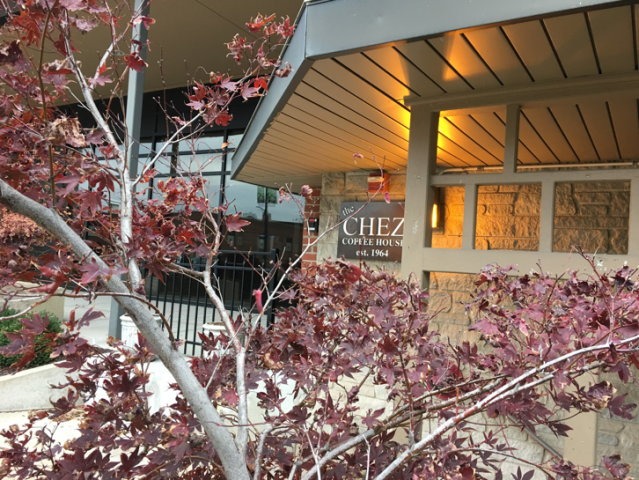 This being part of a church, the dancers could not meet on Sundays and moved to Monday nights. Meanwhile, the musicians kept meeting on Sundays at Clare’s house, bringing food and playing. When Clare moved to Ashland (1977 or 1978), the musicians moved with her and kept meeting at her house. If you had been there, you might have met Dan Leonard, Mike Hoban, Jesse Evans (who played in St Louis), or Teresa Baker, who played in Swoop and taught the group some of their songs on the whistle. Swoop was a local band with Teresa, and also Carol Goodnick, Dan Leonard, Jake Schumacher, Mary Dee Hall,Becky Pringle, and Bill Herbst. They played Irish music at the Gladstone Manufacturing Company, a bar opposite the Blue Sky-Hi Drive-In, both no longer there, on Old 63. Another band at the time was the trio Banshee with Carol Goodnick, Becky Pringle and  Becky Moody.

When Clare moved to Boston in 1983, the musicians found other places to meet and play. As I write this, the group still meets, on Thursday’s, at musician’s homes or at Broadway Brewery. Clare being back in town, is still meeting and playing with the group. Back in the late 70’s, when the dancers were dancing at the Chez, this group of musicians would play for them from time to time. Swoop would play too, possibly because Mike Hoban reportedly told them that Irish music was dancing music and if they did not want to play for dances, then they were not playing real Irish music. But most of the time, the dancing music was unplanned and it was uncertain who was going to play. Contributions to the musicians were obtained by passing the hat.

People would bring their instruments. Danny Case would play guitar. The primary choice was  Irish dances but Steve Lane also taught English Country, Rapper Sword and Morris dances. Many times, there would be only one musician: Hank or Teresa on the whistle, or Spence Galloway, an old time fiddler. For bands, playing for a dance was not something that came naturally. Dave Para, Jim Ruth, Spencer Galloway, and Rob Golan (the Little Dixie Hoss Hair Pullers) did not think about playing for a dance until the Childgrove dancers from Saint Louis invited them to play for a dance after hearing them play at the Chez. That, they had never done before, even though they knew the tunes written by Peter Lippincott (Snake River Reel), a major caller in Saint Louis and a musician now living in Arkansas. Following this first dance in Saint Louis, the Hoss Hair Pullers started playing for other contra dances and Dave remembers playing for the dancers.

Traditional Missouri fiddlers did and still do have a certain amount of Scottish and Irish influences in their music. But Jim, Dave, Rob, and Spence were playing Appalachian tunes. Others like Taylor McBaine and Pete McMahan played old time tunes. Each fiddler had their own following among dancers, which created somewhat of a line that kept dancers from experiencing other music styles and other dance styles, including contra dances. Once, Spence invited Taylor McBaine and Pete McMahan to play for a dance at the American Legion Hall. Old time Missouri folks who knew Pete and Taylor and liked their music showed up and started dancing. But then, Spence had also invited Peter Lippincottto Mid-Missouri to call some contras. When Peter started to call these contras, which were completely new to the dancers, they stopped dancing. Following this experience, Peter undertook a formal study of Mid-Missouri traditional and square dances and started to introduce these dances in his calling. Education and sharing of styles went back and forth, both with the tunes and the music, and with the calling. After a while, there was a better connection between the old time fiddlers and the Appalachian-style fiddlers. Contra dances now include frequently a mix of tunes and dances from both heritages.

While at the Chez in the late 70’s, a few callers emerged in Columbia. Chris Griffith helped organized the dance group and was calling, until his premature death in 1986 (see Tribune article). Hank learned to call some dances as well. Dancers from that era also recall someone named Buffy. Derek Owens started to call and has been a primary caller for many years. 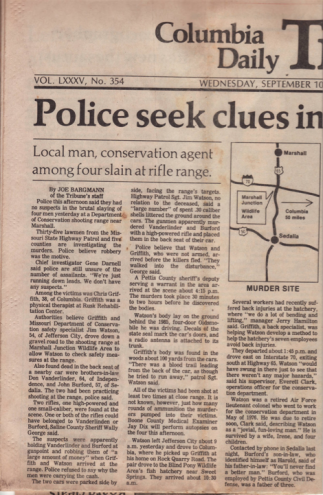 At about that time, the dancers also started to dance on the campus of the University of Missouri, during summers. Maybe the Chez was closed during the summer, or maybe it was too hot to dance inside without air conditioning. So they met between the two engineering buildings, where the Irish symbol is in the brick, by the Engineering school, the fountain, and the stone bench (still seen today on the picture at right). There was no sound amplification. The musicians and the callers were the same as at the Chez, except for those who did not want to engage the mosquitoes.

By 1980, the group was strong enough that others heard about it. Marie tells that, while at Kimmswick, she heard Cathy Barton, Dave Para, and Chris Griffith talk about the dancing in Columbia and that convinced her to move there instead of Lexington, Kentucky, to go back to school. She happened to arrive to Columbia in August 1980 at a time where there would be no venue for the group to meet once the weather would not permit outside dancing on the quadrangle anymore. Sometimes, someone new and bold, who does not know what is possible or not, is what a dance group needs. Marie went to Stephens College, which she knew had a ballroom with a wooden floor, and asked if the dance group could be a student organization and have access to that ballroom. Again, memory fails and it is not clear what the answer exactly was. Maybe the requirement was that at least one participant be a student or that it was open to students. In the end, the dancers started to meet in the ballroom. Every Monday at 4 O’clock, Marie would call the guard and ask him to open the door. Dancers would go have dinner early, and then go to the ballroom to meet the guard and have him open the door, and they would dance. Eventually, the college gave a key to the group because the guard got tired of having to meet them.